After my last post, I had a few requests for examples of the pregens that I’d used. Although there are loads on the Pelgrane 13th Age page, it’s always worth having some more at appropriate levels, and I’ve got a couple of examples here.

For both sets of pregens I’ve not included spell lists – when I’m running I print out the relevant pages of the SRD for that level of spells for the character. 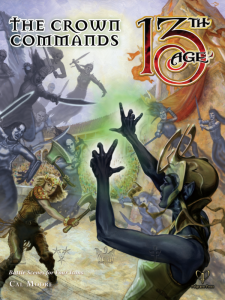 The first set are 5th level – I used them for a one-shot of Gearwork Dungeon, a Battle Scene from The Crown Commands supplement. As that’s a Dwarf King-based adventure, this set are particularly focused towards dwarfs and their allies.

The second set are 2nd level and for a series of one-shots I ran in Greyhawk, the classic setting of original D&D. I’ve included my not-very-thorough notes on PCs in Greyhawk – just replacing the Icons with some of my favourite Greyhawk deities.

Pregens are always useful, both to use in one-shots and also to get a feel for the system. I’m thinking of gathering all of mine in one place (not just for 13th Age – for all sorts of systems), and maybe getting contributions from others, to have a big repository of them that people can use for their own games – if that’s something you’d like to see, comment on here or on social media and I might get round to doing it!