I know, I know, I’m reviewing a supplement from over 25 years ago. I blame finding it on the All Rolled Up stall at Student Nationals last weekend. Invasions: Target Earth (I:TE) is a supplement for Champions, 4th edition, from 1990. It is available in .pdf here. It’s a cracking book, which I’m glad to have reclaimed a print copy of – particularly since it’s a very good supplement for any sort of invasion plot, whether superhero roleplaying is your bag or not.

I:TE presents a review of how to structure a plot involving invasions, giving a solid list of events that you can expect to happen in an invasion storyline, modified for whether it’s an open invasion (aliens rampaging through the streets) or a secret one (subversive shapechangers taking over Earth’s military). It has a useful breakdown of the likely command structure of invading forces, and several examples of both superhero and more mundane invasions.

It then gives a full-length example of an invasion, which is very… 1990s. Demonicus Rex and his army of Demons and Demon Lords (including ratlike Kobolds and flying Furies) have come from an alternate dimension to invade earth. The Demons look and feel an awful lot like Rocksteady and Bebop from the old Teenage Mutant Hero Turtles cartoon, and it gives a quirky Saturday morning cartoon feeling to what could have been pretty dark subject matter.

This being a Champions sourcebook, the majority of the crunch lies in stat blocks for the demon invaders, along with details for some weird Breeder aliens, anodyne “Space Invaders,” giant animals, and robots that could be used with multiple invasion foces. Honestly, unless you’re a the particular type of grognard who still actually runs Champions 4th edition, I can’t see this being very useful. Hero System doesn’t just feel like an algebra textbook, it also reads like it, so don’t expect to be able to make sense of phrases like “1 pip HKA (1/2d6 w/STR), bite” in the Breeder Hatchling description. You’re better off using the pictures to convert some stats.

Don’t buy this for the crunch.

Buy it for the story structure! Seriously, this gives a very good structure for a short, or longer mini-campaign dealing with an invasion. The 10 steps it gives for plotting an invasion, together with numerous examples, are easy to adapt to whatever system you’re running with and give a nice structure to work on.

For a 3-4 hr one-shot, I’d simplify the sections to these 4 (which I’ve picked from the longer list):

This gives a good, if tightly railroaded, structure to use as a basis. As with one-shots everywhere, though, the key to making it not feel like a railroad is to make everything else flexible.

The idea of The Defenders get Organised is that you rally enough support or manufacture a special weapon that the invaders are vulnerable to, so I would have several options there. Likewise, the location and environment of the Final Battle and the vignettes you use for Invaders Win Battles can be flexible and informed by player choice.

With a few stat blocks (with or without phrases like “Transform 5 1/2 d6, Area (1250 hexes), any shape Non-selective target”) and settings, there’s your superhero alien invasion sorted. I’m very pleased that the plot sections of this supplement seem to hold up as well as they do, and it makes me wonder what other gems are lurking in the 1990s supplement time machine.

So, a few more thoughts on the 1 Hour 1 Shot idea. There have been a few developments about this, and I’ve had time to think through a few ideas to help move this forward. The original post is here. I won’t duplicate that post, but the idea was that you should be able to have a satisfying RPG experience in an hour or less. Here’s a few more thoughts on how to make that happen.

The first thing was to try and gather everything in one place – so I’ve started a page here to collect together resources and 1 hour adventures. 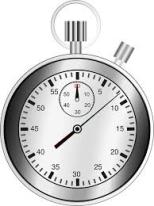 Simon Burley, one of my gaming buddies, has been on a crusade to get more people into tabletop RPGs, and has toured tangentially-related conventions doing 1-hour demo slots, mostly using his own systems. He’s blogged about the process here and most of what he says it completely transferable to all but the most quirky systems. So, non-RPG conventions are a good start, if you can recruit the players.

I’m convinced that there are huge numbers of nearly-RPGers, either involved in adjacent hobbies like boardgames, video games, or wider geek culture, or viewing RPG sessions online. I think most of these folks would spare us an hour to get a taster of the hobby, and that can only be a good thing?

I also often find myself wanting to try a new system out to get a grasp of it before running it myself. This happened recently – it’s been a shamefully long time before I could get into a game of Blades in the Dark, and now I wish I’d tried it sooner as I’m sure it’s a game I’m going to run again and again. It would have been great if I could have found an hour to get a grasp of the system and setting from a GM who’d already done the heavy lifting of learning the system and setting.

The question of when to run #1H1S games is tricky, because a lot of our scheduled times are designed to fit around our idea of the ‘regular length’ session. If we want to introduce new gamers to the hobby, we need to be able to provide structures to change this. A few ideas

I’m sure there will be more ideas and thoughts to follow on this, but in the meantime keep a lookout for more #1H1S resources and comment below if you have more ideas about how to run these.

Burn After Running is nearly a year old! I thought I’d share what I’ve been up to recently, and what is coming in the immediate future.

At the end of March I attended Seven Hills, a games convention in Sheffield. Paul Mitchener has organised it for the past 5 years, and announced prior to the convention that he’s stepping back from this – and I’m pleased to announce that I’ll be taking over from him! I’ve got a team of people who actually know what they’re doing behind me, of course, and Paul has left a very successful format that I don’t intend to mess with, but it’s exciting and daunting in equal measure. We’ve tried to revitalise the “themed” format of the convention by making an executive decision about next year’s theme – so Seven Hills 2019 will be Historical.

I ran two games at Seven Hills 2018, and both went well, from what I can tell. Unusually for me, I didn’t follow the name of this blog, and ran games that I’d previously run – which made my prep significantly easier. I ran the Emerald of the Ice Queen for 7th Sea 2nd edition, which I’ve blogged about here, and it went sufficiently smoothly for me to start writing up my notes to share on here. 7th Sea really is a loosey-goosey system, which holds together more from shared enthusiasm and keeping the plot moving, and my players were very helpful in making sure this happened. I’m going to be running much more 7th Sea, and I’m happy that I managed to get a ‘starter set’ adventure written that was a lot of fun. I’m going to write up the adventure into a playable form and stick in on here in due course – the pregens are already available to download here. 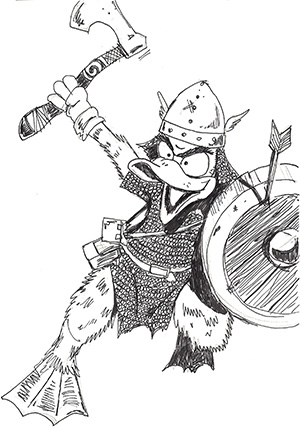 Crontas the Duck – as featured in The Beard of Lhankhor Mhy, in 13th Age in Glorantha (art by John Ossoway, one of my players the first time round)

I also ran 13th Age Glorantha, which was a blast, and similarly an ‘introduction to the system’ sort of game. I’m tidying this up to send off to be published in Newt Newport’s Hearts in Glorantha fanzine, so watch out for that, but I’m pleased that I managed to combine explaining the system with blagging my limited knowledge of the basket-weaving mythic nonsense that is Glorantha.

I got to play as well of course, although I had to leave early so dropped out of a chance to play Mutant Year Zero Mechatron, which I hear went really well. I’ve been meaning to run Blades in the Dark for ages, and so jumped at the chance to play it with Pete Atkinson at the helm, and it confirmed my suspicions that it is a game right up my street. I didn’t expect the setting to ooze through quite as much as it did – but we couldn’t help but feel the steampunk desperation vibe as our created-at-the-table crew staged an ill-fated raid on a rival gangs coffers. I got to play the Face of the group and I got to spam my character’s disguise skills.

And I got to play Earthdawn, the styled “greatest RPG ever made,” with Gaz from the Smart Party in the GM’s chair. It was a lot of fun, although also a great reminder of what 90s games were like, as we all remembered what Perception checks – and not making them – meant. Earthdawn has a slightly funky – and almost certainly uneven – dice ranking system, meaning that any bonuses or penalties result in you rolling a completely different set of dice for every ability, but it didn’t seem to slow us down too much, even if I did pick a Nethermancer (wizard) with 4 pages of character sheet. The plot was an interesting investigation into betrayal and familial guilt that surprised me in its complexity, and we had much more roleplaying than rolling dice – probably for the best given the shonky system.

I’ve started playing some online D&D (5e) over Roll20 – one session in, and it’s great. I have loads of tactical options every round, and this is even playing a cleric! By picking the War domain I’ve managed to be a fairly capable front-line fighter, although I don’t think I can dole out as much healing as the rest of the party was hoping for. I’m still iffy about the square-countiness of the grid, but I’m getting there with it.

Go Play Leeds has had a minor hiatus while we source a new venue, but we have a great one lined up which will be revealed in good time. The start of this year has seen a big rise in people coming who are returning to RPGing or have never played before, and so many new faces makes me feel positive about the hobby.

It’s not tabletop RPGing, but I’ve just started getting my head down in Assassin’s Creed Origins; I’ve just got to Alexandria and hit the open-world segment proper of the game. Can’t help but get a hankering to run some Hunters of Alexandria now!

And I’ve just sent off my first piece of writing for the Liminal RPG, which I’m involved in with a team of great UK RPG designers (and me). The team is already overflowing with ideas for our British Urban Fantasy setting, and as we bounce folk tales off each other and build on one another’s ideas it feels like we’ll have a really great RPG at the end of it.

I’m involved in editing, writing some Case Files (adventures), and a sourcebook on Vampires. What started as a kickstarter for a new RPG has turned into an entire game line, with books on Mages, Fae, Werewolves, and specific location books for London and Newcastle as well as  big gazetteer of the setting, and it should keep us all busy for a while!