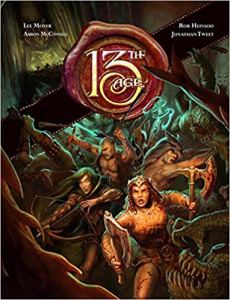 I run a lot of 13th Age One-Shots; I like the balance of narrative player-led stuff and tactical combat. But it is a pretty crunchy system that can take some getting used to – especially if your point of reference is D&D – so here are my top tips for running it at conventions

By the way, if it’s 13th Age in Glorantha (13AG) you’re planning on running, you might want to check here for my advice on running Glorantha one-shots. 13AG is slightly crunchier even than regular 13th Age, so you might want to start by running a one-shot in the Dragon Empire before you encounter the brain-melting exceptions of Storm Bull Berserkers and Tricksters.

It all starts with the pregens

With any crunchy game, how you set up the PCs can make your job much easier. I tend to use this array for attributes, and pre-calculate the bonus+level for my players – and explain in my quick tour of the character sheet that the bonus+level is what you’ll be rolling.

I fill out One Unique Things, but give players license to change them at the start of the game. I know that there are lots of one-shot GMs who ask their players to pick them, but I’ve found that this can leave players confused by the wide range of options. So I pre-populate them, and tell them they can change them, and usually one or two players will.

For Backgrounds, I half-bake them; I give each PC 3 points of Background in a broad, narrative skill (like “Dragon Pass Wanderer,” or “Smartest Elf in the Room”) and let them assign the remaining points however they want, at the start or even during the game. Again, Backgrounds can be picked completely by the players at the table, but they often just aren’t that big a deal in 13th Age One-Shots, so it’s often not worth players worrying too much about them.

I add on any descriptions of powers on the character sheets, either paraphrasing them in as simple language as I can manage or cutting and pasting from the SRD. Most of my prep is spent getting these pregen sheets ready, but that’s no problem because 13th Age is very player-facing in its complexity; most of the tactical heft and rules exceptions are carried by the players.

…and carries on with the pregens

I tend to go low-level with my 13th Age games – level 1-3 is a good level for standard heroics, and even 1st level characters have plenty of tactical options. For higher levels (and I have run as high as level 5) I’ve combined a few optional rules for damage – I let players choose to either inflict average damage with their weapons or flip a coin for max/min damage with each hit. I make Crits work exactly the same – they can choose when they roll a crit whether to double average, or flip a coin to risk it. I add a “Damage Track” under any attacks on the sheets that looks like this:

It’s worth taking care at the start of the game when you hand out the pregens. Some classes are significantly more complex than others, and it’s a good idea to be open with your players about this. I never say that they need to have played the game before, but if they are playing a Bard or Sorcerer they’ll need to be up for engaging with some rules to make the most of their characters in ways they won’t have to if they are playing a Barbarian or Ranger. I also try to remind them the Fighter is towards the more complex end of the scale, because it can sometimes still be seen as the easy option – which in 13th Age it definitely isn’t.

Get your kit out

Central to 13th Age is the escalation die, a d6 that goes up every round and gives the PCs bonuses to attacks. It’s a great device for pacing battles, and it’s such a simple idea that it can be easy to forget to update it at the start of the round. My solution is to get a BIG d6. Mine is pictured here – it’s 7cm on a side and weighs about a pound, and it’s not easy to ignore. It wasn’t cheap, but you can get big foam dice cheaply, or just a whiteboard to write the bonus on – bear in mind that if you have a Trickster PC in 13th Age in Glorantha they sometimes get to roll the escalation die so you might want it to be an actual die.

I avoid maps for 13th Age – it’s loose range band system doesn’t use them, and they can actually discourage the kind of freeform swashbuckling action that works so well in the game. Non-gridded maps, like those that come with the Battle Scenes, can be useful, but even with these I’d be reluctant to let my players put figures on them – they are much more about a feel for the location rather than precise locations.

For Icon Relationships, I like to write them out onto cards and give them to my players after rolling – either plain index cards or these dry-wipe ones from All Rolled Up. Giving the relationship rolls on cards encourages the players to “spend” them during the one-shot, and that they won’t forget them. I usually give my players the option of spending at the start of the session for magic items or boosts (and prep a few ideas about what these might be) but also keep them for interventions in the game. I’m super loose in what they can get with them, trying generally to say “yes” to anything that sounds cool – this is a cinematic action game after all. (For Glorantha, the same applied to Runes, although they can’t spend them at the start of course).

The montage technique is absolutely brilliant in a 13th Age one-shot, adding a sense of the epic and letting you fit much more ‘plot’ into your one-shot, so it makes it a satisfying game. There’s a brief summary of it from Pelgrane’s Wade Rockett here, but there are more details in the GM’s Kit – which is probably the most useful resource you can get if you plan on running 13th Age one-shots a lot, even more so than the Bestiary.

Even a basic dungeoneering adventure can be improved with a montage – and I’ve used it exactly for that, the party battling the initial guardians of a ruin and the montage-ing their way through the twisted tunnels and subsidiary monsters until they run up against the big bad at the end. In my module The Beard of Lhankor Mhy for 13AG the entire journey across Snake Pipe Hollow is run as a montage – and for me as a writer, it was a good workaround for covering an iconic part of Gloranthan adventuring lore without stepping on canon. In play, the Glorantha experts can go to town introducing whatever chaos monsters they like, and coming up with inventive runic ways around obstacles.

There really is. All the organised play adventures are excellent either to use or steal, and unusually for published adventures are actually easy to use in play. Oh, and they’re all free. There are lots of published adventures, including the Battle Scenes which contain short adventures based around the icons. All of these are very easy to steal or borrow set-pieces from, and literally a couple of these and a montage (and maybe a couple of interesting NPCs to interact with) and your one-shot is prepped). You might spend a while planning the pregens, but the rest of your prep should be fairly straightforward.

Enjoy! I think 13th Age is a great game for one-shots, and a game I keep coming back to again and again. Because the players come up with so much narrative, different games can give surprising developments which is always a nice feeling as a GM.