Fairly regularly, I run games at conventions or other meet-ups that function without the traditional GM role. GM-less is a bit of a misnomer, as really the GM role is shared out between the rest of the group; some writers prefer the term GM-full, but that just reminds me how much terrible food I eat at conventions, so I prefer GM-less.

It’s not quite the easy ride you might assume to run games like this at a con – with your name at the top of the sign-up sheet, you still feel responsible for everyone’s fun at the table, and you are devolving even more of the power to make or break that to your players. Often what I think I’ll gain in not having to prep pregens and plot I make up for in stress about the system. Here’s my advice for doing it as painlessly as possible:

Make sure that you state in your game ad that it’s GM-less, and that players will be expected to contribute to the plot. Playing a game like this at a convention is a great way for gamers used to traditional games to experience it, but not if it grabs them by surprise. Give some indication of the resolution system, or lack of it, and whether the players will keep the same characters or not.

For example, in Fiasco there isn’t really a resolution system at all – just a feeling from the rest of the table for a positive or negative outcome – but players are always playing their own PC if they are in the scene (if they aren’t, they’ll be picking up an NPC, but they have final say over their own PC’s actions). In The Final Girl, there’s a direct resolution system with cards to decide who dies, and the PCs aren’t ‘owned’ by anyone – at the start of a scene you can pick any character card up and play it. Some folks will find one, or the other, of these things weird, and will want to know in advance if that’s the case. So tell them. 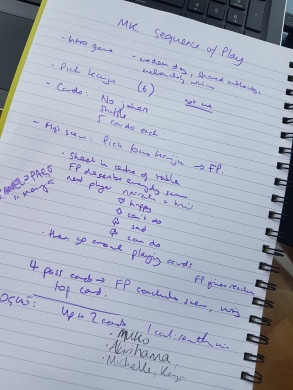 Absolutely essential that you know the rules, and in particular, the procedures of play, in the game. These games have a formalised sequence of play and events, and this is what you need to know inside out, like you would know the plot of the adventure you were running in a more traditional game. Personally, I like to write out bullet point summaries for the sequence of play. I have these in front of me at the table to refer to, but usually I don’t need to look at them – the act of writing them out internalises them enough that after a couple of scenes we all know what’s happening. To the right are my notes for running a game of Melancholy Kaiju last weekend – I think I wrote these out before breakfast on the morning I was running it.

Make sure you’re clear to the players what kind of game this is likely to produce, and ask them to reinforce it. This can be tricky depending on genre – for instance, in Fiasco, it’s absolutely essential that you pick a playset that all the players are familiar and comfortable with. Every time I’ve had a sightly flat game of Fiasco, it’s been directly because of us not quite gelling with the genre. Good ones for first time players are Gangster London (at least in the UK, everyone can do a Guy Ritchie movie), Touring Rock Band (again, Spinal Tap is etched pretty deep in our national consciousness), or one of the Cthuhu / D&D playsets. Bring a selection and get the rest of the table to pick – it does actually say in Fiasco to do that, but I’ve certainly ignored that advice in the past.

Alongside the tone in the fictional setting, set the tone in real-life as well. Call breaks when needed, check everyone is okay with the pace and the plot, and take the lead in explaining and/or adjudicating. Usually the procedures of play will moderate between player disagreement, but be prepared to be the referee yourself if needed – or if one player is dominating or fading into the background.

Important advice for every game, but remember that you’ve got to model player behaviour as well in a game like this. Pursue your PC’s goals and embrace the situations they will end up in, and you will encourage the other players to do likewise.

Remember to be an audience as well – and model this. When you have a good scene, break character to point it out, so that other players do too; this feedback loop is important in GM-less games, as players will often be wondering if they are ‘doing it right’ if they introduce elements. Reassure them they are by pointing out awesome stuff as it happens.