Let me begin with a disclaimer. I do not play, follow, or even really understand Magic: The Gathering. I understand that Ravnica is a setting in Magic, where some of their cards are set (?),  and that Wizards of the Coast own both properties, so it makes logical sense to bring a D&D supplement covering it as a game world. I had written this off as a game supplement I did not have to get into – that it would be much more useful to players in the intersect of the Venn diagram of RPG/Card gamers. And I’m not a massive fan of high-magic kitchen-sink setttings, so Ravnica probably wasn’t for me. (M:TG has got to be high-magic, yeah? It’s in the name). 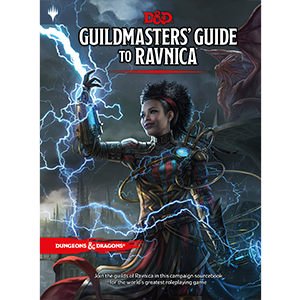 Then I browsed the book, and saw it had steampunk mad scientist goblins and anthro elephant men and centaurs and mushroom druids, and shrugged my shoulders and bought it. I’m glad I did. It’s a funky and original setting that shakes up some D&D expectations, and it’s also ideal for one-shot play.

Ravnica is a world-sized city; an entirely urban game world. What areas of ‘wilderness’ there are are rubble pits, ruined parts of the city, or ancient catacombs. It’s steampunky; there’s underground trains, bio-engineered human hybrids, and a scientific approach to magic from many of the guilds that bicker and fuel much of the conflict in the setting. There are ten guilds, each ostensibly running a part of the city’s functions, but also at each other’s throats. A tenuous Guildpact keeps them from open warfare, but it is currently manifested as an actual person, who keeps wandering off onto other plains, so it’s policed unreliably.

The guilds themselves are at the centre of play in Ravnica, and they range from the fairly vanilla (the Azorius Senate are the city watch, the Boros Legion are the army/mercenaries) to the interesting (the Cult of Radkos, led by an actual demon, provide performance and entertainment like bloodthirsty court jesters), to the brilliantly gonzo (the Simic Combine use bioengineering to augment evolution, the Orzhov Syndicate are a combination church/bank/thieves-guild led by a cabal of ghosts).

There’s a chapter covering in just the right amount of detail (for me at least) the Tenth District of the city, with lots of stuff for players to do and trouble for them to get into, and each guild gets a set of random mission tables, an iconic location mapped out, and a bunch of monsters and NPCs. The NPCs are great – the Izzet League, mad scientists and experimenters, have several NPCs who are basically flamethrower-wielding guards. D&D5 could use more NPC stat blocks, and this chapter is full of interesting ones, and they are easily adaptable to other settings.

You get six new races – Centaurs, Goblins, Loxodon (elephant-men), Minotaurs, Simic Hybrids (bioengineered humanoids), and Vedalkin (blue-skinned semi-aquatic humans). There’s an extra Cleric Domain (“Order,” yawn) and the Circle of Spores for druids, as well as detailed guidance for which classes and races would fit for each guild. Each guild also comes with a default Background option that links the PC into the Guild they serve.

There’s lots and lots of random tables. D&D5 has really embraced these and I think it’s a good thing. Where previous D&D settings sometimes left me feeling stifled at the weight of background needed to navigate it consistently (Forgotten Realms in particular), distilling implied setting into random tables is a much clearer way to set your imagination running. If you’re not convinced, you can listen the The Smart Party here use the DMG to create a random adventure, and see what I mean.

While there’s some discussion of how PCs from different guilds could work together, I can see lots of great one-shot play emerging with the PCs working for just one guild. The structure of the guild interactions, and the resources provided for each of them, mean it’s easy to think up some exciting scenarios – pick a Guild for the PCs, pick the Guild they are up against and a villain’s nefarious plan, and then throw in another Guild with perpendicular interests to get in the way and complicate matters.

There’s enough variety within each guild to make a sufficiently distinct group of PCs, and the mission-based structure works really well for a tight opening to your one-shot and an obvious climax. Conversely, the urban environment and the option to move around the city quickly make it easy to have multiple resolution options in the middle of your one-shot (the swell, which I talk about here). It even comes with a sample adventure, which is good (but not Great – I’d have preferred a more exciting enemy than a Goblin gang-lord, and you could fairly easily set most of the adventure in Waterdeep or Sharn), but it gives a good framework as an introduction to the setting. Of course, it’s written more as an intro to the setting than a one-shot, and so provides leads at the end for the PCs to follow up, but having an adventure as a matter of course in a setting book is a good thing generally.

In general, I’m really pleased with Ravnica as an addition to the D&D stable, and I think it’ll make for some excellent one-shot play. Now, how’s about Spelljammer and Dark Sun?