In Part 1, I described an investigative adventure for Urban Jungle (UJ), an anthro noir game by Sanguine. In Part 2, I dug into why I’d planned it how I did. This is the final installment – for now – of my series of posts on running investigative games.

I got to run the game a couple of weeks ago at Go Play Leeds, the monthly one-shot meetup I run in Leeds, Yorkshire. Pleasingly I managed to get signups even with the slightly niche pitch (“It’s 1930s New Orleans gangsters… you’ll be investigating an underworld murder. Oh, and you’re all anthropomorphic animals.”) I had 5 players who threw themselves into the game. It all raced along at pace, and I got positive feedback at the end of it as well. 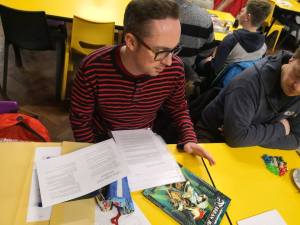 What Seemed to Work

The RDJ Sherlock Holmes method of clue discovery worked well – each scene and it’s main discovery had some action or roleplaying attached to it; along with the unfolding breadcrumbs the PCs also explored the city and came up with some good in-party japes. We managed a brawl, a car chase, and a couple of inventive uses of skills along the way to the big shootout at the end.

Getting player investment in character by asking them who they trust the most and least in the group worked as well as it has for the last few games, and is now going to be added (along with the introductory montage) firmly to my one-shot utility belt. Asking the players to define their link to the nightclub also helped, as they fleshed out their starting situation, and the nightclub, with every answer they gave.

The general structure seemed to work well, too, with a bang of an inciting incident and then a few options that all led (with clue-heavy links) to the finale in the hotel. I used my usual finale structure of “any reasonable plan works, but not as you expect it,” and they came up with an elaborate distraction by befriending the crocodile gang to deal with some of the guards, just leaving the villain and his henchmen to defeat.

The system! I was really impressed with UJ, especially how it handles non-combat characters. By making them hard to hit but giving them options to use social skills in combat (which, crucially, are balanced against regular combat), it really captured the feeling of a noir game where guns are a last resort. I’m stoked to try out Ironclaw and even their bonkers-looking anime sci-fi, Myriad Song, now.

What I Had to Tweak

A gap in my planning (obviously, the players are going to ask about the police, even if they don’t go to them) and I had to improvise a coyote policeman being paid off by their nightclub – he gave them 24 hours to fix the case themselves before he’d have to pass it up to the station. This was so obvious an omission that I just made him up, but I will add him to the adventure now. I can’t even remember what I called him – but he definitely needs to be rolled into the prep now.

One other thing that was certain was everything was very broad brush strokes – I think that some more definition in my descriptions (senses, feelings, weather) would have helped. These things are hard for me to improvise, despite always thinking I can do it on the fly. One of my descriptions might have showed my influence a bit strongly (the nightclub, with a private room viewing the dancefloor, prompted one player to say “I’m picturing Harlem’s Paradise in Luke Cage;” I had to admit that was what I was picturing in describing it.) But maybe that’s not a bad thing.

So as one of my 2019 plans, I’m trying to repeat-run games I’ve prepped rather than run them once and consign them to history. This will definitely get a run-out again – it’s definitely a reserve game for Seven Hills, and I’ll look for opportunities to test my anthro noir pitch in future too. Maybe even online, if I get any interest – seen as that’s something I’m trying to do more of as well.

I’m also going to be developing some more investigative games, and I’ll share them in an occasional ongoing Breadcrumbing series, so watch this space.