Day of the Octopus is the starter adventure included with Marvel Super Heroes basic set, first published in 1984. It’s a straightforward adventure that I remember liking when I first picked up Marvel (considerably later than 1984!), and it still stands up well. It’s got some lessons in it for prepping a one-shot, especially for convention play, and I think it bears a closer look. It’s also available as a download on the Classic Marvel Forever website, if you want to give it a closer look.

Specifically, it does a few things well

There’s a few things it does… less well, I guess

It’s designed with specific heroes in mind – Spider-Man, The Thing, and Captains Marvel and America. In the first scene (or Chapter as they’re called in the adventure) this is important, as they start interacting with their day-to-day lives – Peter Parker is with Aunt May, The Thing is sulking in the park, Captain America is with his “gal.” It also demonstrates the classic superhero team structure in RPGs – that although the heroes are normally arranged into specific teams in the comics, in the game they can form a team of whatever heroes the players want to play.

It’s a 1984 adventure, so there’s boxed text – but it’s pretty decent boxed text though – no need to describe dungeon rooms makes it flow easily. Each chapter also starts with a short comic strip, where we see the start of the action, which is a nice touch – I particularly like the investigative scene where The Thing is a deerstalker, especially because it makes him look a bit like Bungle from Rainbow.

It’s designed to be used with the maps supplied – this book came in a boxed set, of course, and there’s a fair amount of tactical faffing about where to place various PCs and their opponents that was probably a lot more important back in the day than it is now. Maps for superhero games leave me cold – especially when there’s two characters that have fairly limited movement alongside two with massively fast movement – can’t Captain Marvel travel at the speed of light? Why does she need a map? 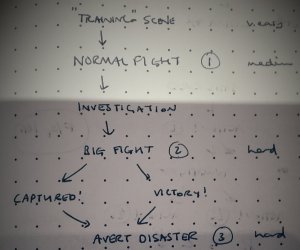 In Chapter 1, the PCs start separately, while still on the same map, and face one or two Thugs (normal humans) each. These are trivially easy fights, and this chapter shows up as a nice little training mission. In my one-shots I often have an easy fight as the first scene, and this approach (having a really, really easy fight)is something that I’d like to try. I’d expect both encounters to only take a round or so, so it’s a good stakes-free way to teach the basic rules.

No sooner are the thugs dealt with, Chapter 2 starts, where some actual supervillains (one per hero – another superhero RPG trope – and somewhat randomly assembled) appear and try to steal the same tech. It’s expected that they’ll be thwarted, and a Dr Octopus arm will get the tech anyway, but this is the first real fight of the adventure. It has detailed notes for how the villains will fight, which is a thing we don’t often see enough of these days I think – even if Radioactive Man’s first action is to blow a hole underneath The Thing so that he has to spend three turns climbing out, which feels a little bit mean on that player.

In Chapter 3, they do some investigating, which is snappy and has multiple routes and ways of finding their way to Dr Ock’s hideout. There’s three places they can go to pick up clues – the site of the battle, the rental company they got the truck from, and a dive bar on the waterfront. It’s expected they’ll go through these places in order – if I was running this I’d add multiple clues to each location so they didn’t have to go to all three (or could split up), but it’s still presented as a pretty pacy segment, and isn’t reliant on dice rolls to move the plot forwards.

Chapter 4 is the hideout itself, where they fight Dr Octopus, any remaining supervillains from the previous battle, and several environmental effects. This is definitely mean to potentially be a tough one, as Chapter 5 is what happens if they lose, and begins with each hero being captured individually and them needing to escape.

Chapter 6 is the final scene, when they try to stop a gigantic Octobot as it rampages through New York. This fight is almost unwinnable, but it’s also much more of a problem solving challenge – the robot isn’t something they can take on directly, so they need to try and disable it using trickery. In game terms, this is almost a skill challenge compare to the fights beforehand – which is also a nice way to mix it up.

So, the structure looks roughly like the diagram above. We have 4 core scenes – a training level, a normal challenge scene, and two hard challenge scenes, with two of those being fights and one being more of a skill challenge. There’s a few different ways to move between what is basically a linear plot structure, and there’s a safety net in case they don’t get any further.

The safety net is a bit weak though – it’s Thor – who can either swoop in and save the day in a fight, or just tell them clues if they miss them. I don’t think there’s anything wrong with this kind of contingency plan in a one-shot, but I prefer some immediate, tangible consequences to a failed scene – maybe Thor does offer the details of Dr Octopus’ hideout, but that means they have time to prepare themselves and the next fight will be tougher, or the robot starts rampaging sooner. 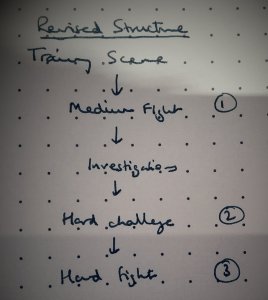 For me, I like to have the final climax be a big, challenging battle (this also removes the need for a “contingency Thor” for that scene) and make the skill challenge be the middle scene. For skill challenge, it could be something different to an actual fight, but I think it needs to be an extended task that is supported by the system – in Fate this could be a Contest or a Cliffhanger (from Masters of Umdaar), it could be a Chase scene in Savage Worlds or Call of Cthulhu, a starship combat in a sci fi game, or a social conflict in a system which supports this. In all cases, it’s worth hanging some proper stakes on the scene, so it has tangible consequences to the folowing scenes.

I really like the first scene of this adventure – by introducing the players individually, and giving them a small interaction with the rules, they set up a low-stakes way of teaching both roleplaying and the basics of the rules. I’ve done this with individual skill checks before now, but not with really weak opponents, and I’d like to try it out with that – either with the heroes as individuals or with them together teaming up against a small obstacle.

I’ll definitely be re-skinning this structure and trying out some of the ideas here, and I’ll post on here and twitter about how it goes. I’m going to pull out some other ‘classic’ one-shots and do a similar unpacking of them – what should I look at next?

I know, I know, I’m reviewing a supplement from over 25 years ago. I blame finding it on the All Rolled Up stall at Student Nationals last weekend. Invasions: Target Earth (I:TE) is a supplement for Champions, 4th edition, from 1990. It is available in .pdf here. It’s a cracking book, which I’m glad to have reclaimed a print copy of – particularly since it’s a very good supplement for any sort of invasion plot, whether superhero roleplaying is your bag or not.

I:TE presents a review of how to structure a plot involving invasions, giving a solid list of events that you can expect to happen in an invasion storyline, modified for whether it’s an open invasion (aliens rampaging through the streets) or a secret one (subversive shapechangers taking over Earth’s military). It has a useful breakdown of the likely command structure of invading forces, and several examples of both superhero and more mundane invasions.

It then gives a full-length example of an invasion, which is very… 1990s. Demonicus Rex and his army of Demons and Demon Lords (including ratlike Kobolds and flying Furies) have come from an alternate dimension to invade earth. The Demons look and feel an awful lot like Rocksteady and Bebop from the old Teenage Mutant Hero Turtles cartoon, and it gives a quirky Saturday morning cartoon feeling to what could have been pretty dark subject matter.

This being a Champions sourcebook, the majority of the crunch lies in stat blocks for the demon invaders, along with details for some weird Breeder aliens, anodyne “Space Invaders,” giant animals, and robots that could be used with multiple invasion foces. Honestly, unless you’re a the particular type of grognard who still actually runs Champions 4th edition, I can’t see this being very useful. Hero System doesn’t just feel like an algebra textbook, it also reads like it, so don’t expect to be able to make sense of phrases like “1 pip HKA (1/2d6 w/STR), bite” in the Breeder Hatchling description. You’re better off using the pictures to convert some stats.

Don’t buy this for the crunch.

Buy it for the story structure! Seriously, this gives a very good structure for a short, or longer mini-campaign dealing with an invasion. The 10 steps it gives for plotting an invasion, together with numerous examples, are easy to adapt to whatever system you’re running with and give a nice structure to work on.

For a 3-4 hr one-shot, I’d simplify the sections to these 4 (which I’ve picked from the longer list):

This gives a good, if tightly railroaded, structure to use as a basis. As with one-shots everywhere, though, the key to making it not feel like a railroad is to make everything else flexible.

The idea of The Defenders get Organised is that you rally enough support or manufacture a special weapon that the invaders are vulnerable to, so I would have several options there. Likewise, the location and environment of the Final Battle and the vignettes you use for Invaders Win Battles can be flexible and informed by player choice.

With a few stat blocks (with or without phrases like “Transform 5 1/2 d6, Area (1250 hexes), any shape Non-selective target”) and settings, there’s your superhero alien invasion sorted. I’m very pleased that the plot sections of this supplement seem to hold up as well as they do, and it makes me wonder what other gems are lurking in the 1990s supplement time machine.