Here I talked about why we should be running D&D one-shots; I shared some pregens here (there will be more of them later); and I talked about the start of sessions here. In this post I’m going to offer some tips from experience for running for a table that are entirely new to tabletop RPGs. Some of this advice will be D&D focused, but a lot of it goes for any system where you have a lot of players who are new to the hobby. 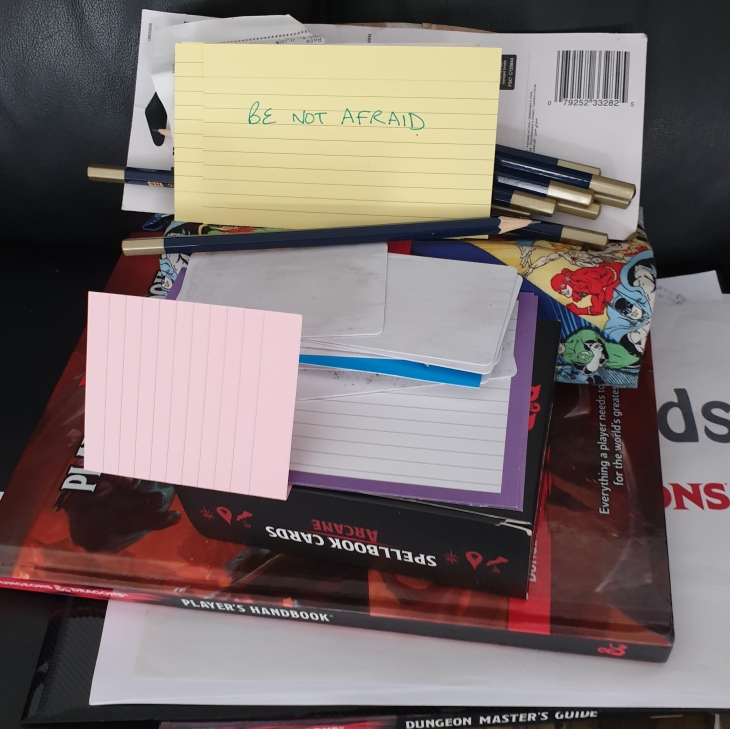 Bring All The Stuff, Make Friends

With more experienced players, or in a convention slot, I’d probably want to start at least at 2nd level, to give players a range of options. With new players, I take advantage of D&D’s training levels and stick to level 1. Why?

Keep it As Simple As You Can

The pregen sheets I used (in the same format as the 2nd level characters here) are here. From the feedback of my six new players, they were easily complex enough – in fact they couldn’t believe that the actual character sheets were more complicated than this, until I showed them the one in the back of the Player’s Handbook.

I had spell cards for the sorcerer in the game, and I’d recommend having them ready, and introducing that PC as the most challenging. In my game I nudged the sorcerer towards the one player who had his own set of dice – that seemed to indicate he’d be down for a bit more processing, even though he hadn’t played before.

Say what your character does, and we’ll work out what happens from there.

The reference point I used was videogame RPGs, as that was one point of reference they were all familiar with. Saying it’s like you have dialogue options, except you can say whatever you want, and I’ll say what the NPC says, helped, as did referring to combat as being turn-based like Final Fantasy.

Model What To Do

So, as I talked about here and here, I like to do a bit of an introduction for a one-shot to bind the PCs together. This felt a bit like throwing them in at the deep end, so I just asked for a brief description of what their character looked like and acted.

I modelled this first myself by describing the merchants who had hired them – the confident, worldly wife and her feckless moustached husband who didn’t understand why they needed to hire adventurers for support as he could deal with any bandits himself. They then went round and, following my lead, described their PCs in a similar amount of detail. I did some interjecting, like “I’m thinking you’re a pretty wide-eyed and innocent…” and giving positive feedback while they did this.

This was absolutely crucial to the action that followed. When their cart was inevitably attacked by some bandits, one of the fighter’s first actions was of course to check on the female merchant in the cart that she was OK – while the sneaky sorcerer hid under the cart and hoped he wasn’t noticed until it was obvious he had been.

Get the Action / Roleplay Balance Right

I think this varies for each game, but for D&D I was certain I was going to use a proper dungeon – so I started with Dyson Logos’ excellent Goblin Gully, and added an inciting event (the aforementioned bandit attack, and then some investigation in town) before they ventured to the dungeon. Prioritising the roleplay and being your character meant that, even in combat, everyone was describing their awesome (or not so awesome) moves. I’ll be sharing my notes on how exactly I did this, and my D&D5 conversion for it, in a later post.

Minis: You Do You

I didn’t use minis, because they aren’t me. I never really use them – even when I played in a mini-campaign of Pathfinder, we managed to muddle through (I’m not a fan of the term “Theatre of the Mind,” either, as it just sounds pretentious).

But if you’re a GM who uses minis, by all means crack them out – props are good, and they provide a good focus for the play. I would definitely have had less swashbuckling derring-do from my PCs with a map, but that’s just my tastes I think.

Running D&D for six complete newcomers is one of my most exhilarating experiences at the table this year. I can’t recommend it enough – not just for bringing new people into the hobby, but for the enjoyment yourself of seeing them grow in confidence through the game. And, despite what I’m saying in a lot of these D&D posts, after a few games of D&D it might be time to talk to them about other games – and see if they want to give, say, Star Wars a try.

Have you run games for complete beginners? How did it go? In future posts I’ll expand on how I opened out Goblin Gully, and give my own approach to balancing encounters and timings for D&D5.