I’ve spent the best part of the summer running D&D5e for (relative) newcomers to the hobby. I’m at the point where I’m probably going to take a breather and look to my shelves for some other games to prep one-shots of now, but I’ve learned a few more things that are worth sharing since the first post that started it all. So, here goes:

Maps Are Good, Even Without Minis

A map – even one sketched with a Sharpie on plain paper – is really useful if you’ve got a set-piece combat scene. I’ve talked before about how I’m not a huge fan of minis and grids – and in this context it makes the game a little bit more complex – but a map is really useful. Next time I run, I’ll try and find some evocative art as well – even just pictures of a monster or scene – to help players get into the moment. 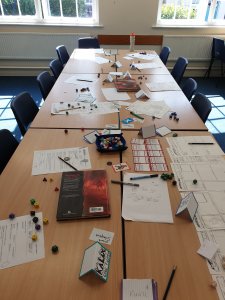 Over the summer, I ran a D&D Activity Group with another GM on a residential week. We had 12 players in two groups of 6, playing for 1hr 15min a day for the week. We thought up linked plots for our groups – one was escorting a pair of children who would turn out to be werewolves, one was hunting a beast from the town who turned out to be an escaped werewolf. We had four sessions as separate groups, and managed to drag them together so the final two sessions could be a huge 12-player group as they joined forces to face the source of both of their problems.

We had a real range of experiences in the game – a couple of experienced players (more on them later), some who had played a few times before, and some completely new to the hobby. Now, I’m not going to run for 12 players again very soon – but the session where they linked up and shared their stories was -amazing-. It’s the kind of ambitious cross-campaign shenanigans that I’m usually wary of, but thanks to my amazing co-GM we managed to pull it off. So don’t shy away from doing the epic. It works.

For my games, I’ve brought a big pile of dice and got my players to pick out their own d20 and any other dice they might need. This is not the best way, I learned from my co-GM in the werewolf game. The best way is to have a set of dice for each player. They have their own dice, can move them around and put them on their character sheet, and have ownership of them for the game. A player’s relationship with their dice is a key part of the game, and by having their own they get to try this.

If you’re lucky enough to have a few players with some experience in your group, use them! Conventional wisdom might say to encourage them to play the more complex classes – the wizard or the sorcerer – but I’d say that it works better having the player next to them playing those, and them helping them out. They need to have a players handbook – they can look up spells, if you don’t have spell cards, and even conditions – I’m a big fan of saying, eg “OK, you’re weakened – Scott, what does that mean in-game?” and letting them manage it.

Use The Good Stuff Out There

I’ve mentioned Spell Cards, but having the Monster Cards lets you avoid juggling a monster manual and you can show them the art on the back. I have run Goblin Gully a few times (with my adapted notes here), but I also found Troll Trouble by Gary Whicker to be an excellent first level adventure – a good mixture of dungeoneering, role-play, and interesting action scenes. It’s a long time since I’ve run it, but The Goblins and The Pie Shop is a fun little one-shot too that I posted up on here. Come to think of it, it still sees a lot of traffic, so I’m planning to put some more 1st-level one-shots on here as I write them. But for now, I need a break from D&D – you can have too much of a good thing after all.