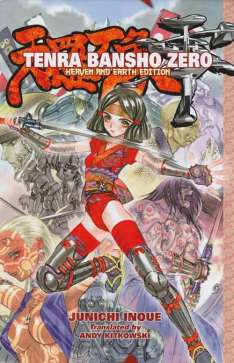 It’s been a long time coming, but I finally got my head around running Tenra Bansho Zero, an RPG of hyper-Asian fantasy lovingly translated from the Japanese by Andy Kitkowski. It’s a beast. But an awesome, gonzo, emotionally charged beast, like a Kaiju with laser cannons being ridden into war by your long-lost son to avenge your disappearance. The path to bringing this to the table wasn’t painless, but it was worth it. I hope any prospective GMs are persuaded to give it a go with the advice below.

Pregens all the way

You need to pre-select (or let your players pre-select) their characters. I recommend using the sample characters in the book, unless you have a very specific archetype in mind for your plot; I made this one-sheet for my players to help them pick. Reassure your prospective players that they’ll get to evolve and customise their character in-game, so starting with templates isn’t as restrictive as in other games.

Don’t use the Onimyuji – it’s just too complex to have a shiki-summoning sorcerer in the party unless they already know the rules – in which case, why aren’t they running the game?

My players picked Samurai, Kijin, Shinobi, and Kugutsu – a good balance, and easy on the rules – I filled in character sheets with their abilities and printed off the Dark Arts section for the Shinobi to manage, as they can buy extra powers in-game and it handed over management of those rules to the player instead of me.

Incidentally, for NPCs I just used the sample characters too, adding 2 to each Attribute and the extra Vitality described (double it, add 2 per player in the game, or 5 per player if they are a solo boss, add a Dead box but no Wound boxes).

Get your stuff together

You will need piles of d6s. You will need piles of counters, or paper chits, for Aiki and Kiai. I was lucky and found a few in the sale at Dice Shop Online; otherwise improvise, but bear in mind it’s not an exaggeration to say you might need 100+ Kiai chits, and players may well find themselves rolling 30d6+. I put my Aiki and Kiai out on All Rolled Up dice trays in the centre of the table to remind the players that they should be awarding them.

There are some really useful rules summaries out there, and I found some other advice on the internet (this, from Deeper In The Game, was really useful); print them out and use them, and expect some hard-to-find rules – for me, it was how quickly Soul points recover (it’s one point per hour, FYI).

You only need a straightforward plot for Tenra. Use the examples available – Tragedy in the Kose Art District is good, as is Lotus Blossom’s Bridal Path – which I don’t seem to able to find online now. Honorable mention to Rinden Snarls, which I played to get me into running it – quite a few years ago now. I’ll be writing up the scenario I ran soon too, expect to see it on the download pages in a few days time.

I went with a basic Seven Samurai plot; a village was under threat from bandits to the East and a warlord from the West, and had called to neighbouring provinces for help. Each of the PCs was a representative from one province, brought together to help the village. I added a nearby Oni village, a treacherous villager, and a forest demon who had corrupted the lands nearby and subjugated the Ayakashi river spirit who guarded the village.

Think symbolism and theme; I had cherry blossoms running as the theme of the village, and they reappeared at the end of each act – either falling or blooming in the trees. Corny, but it worked.

In the Zero Act, every player should get to showcase their PC, and it’s a good opportunity to roll on the Emotion Matrix, which is going to provide all the subplots you need. I picked the zero act from each of the sample characters that I found most melodramatic, and we rattled through them with an encounter with an important character, a roll on the Emotion Matrix, and a fade out once that conflict had been resolved (or left juicily hanging!)

I deliberately didn’t use the PCs being recruited as the zero act for any of them – this was entirely about establishing their characters as protagonists, not introducing the mission. My Destinys were much more about the characters than the mission itself.

The Rule of Reincorporation: Chekhov’s NPC

This is a specific case of a general one-shot rule, which will no doubt spawn its own blog post, but any NPCs that appear in the Zero Act need to reappear during the game, unless they are boring and/or dead (and even dead ones might reappear).

The warrior who defeats the samurai and leaves him for dead, inspiring him to undergo the painful samurai transformation? Of course they will be on the antagonists’ side in the final conflict. These call-backs are essential to make an epic story feel fully-resolved.

Scene One (and Two)

I’d recommend having the players meet gradually as your first scene. That way you can roll the Emotion Matrix each time a new PC arrives and have a pause for them to roleplay and internalise these relationships. Be aware this may create some (temporary or otherwise) PvP situations – and require some interpreting of the results.

As with most of my one-shots, I made scene two a ‘training combat’ – straightforward opposition that let the players get to grips with the rules and allowed a break in the scene pattern below.

You will have scenes that are epic combat, where dice will hit the table. You will have scenes of roleplaying, where players will push their Fates. In the roleplay scenes, in my experience, dice rarely hit the table. All you need to do to get the pace right is have a good balance of these scenes. During the roleplay scenes, it’s fine to sit back and watch; if your players are chewing the scenery with each other (and the Emotion Matrix will no doubt push them to do this), let them do it.

With roleplay scenes where they were petitioning an NPC, I usually waited until a key moment in the conversation happened, cut it off, and asked for a Persuasion check (or other social skill). Be prepared for the players to make these rolls easily – they are rolling a lot of dice, and if it’s a roll they care about they have lots of Kiai to spend for bonus dice, skill, or successes.

At the end of the day, Tenra is a game almost without balance, with hard mechanical systems to encourage the scenery-chewing social interactions. The Emotion Matrix is up front and centre for everyone, and it should provide all the drama you need as long as you provide enough antagonists and mooks to fight.

I’ll be publishing Four From Dragonscale, my own scenario, in a few days on here, and there is already Tragedy in the Kose Art District and Lotus Blossom’s Bridal Path available. Take one of these (they’re pretty much complete playkits, given that they include pregens and all you need to run) and use it, mine it, copy it, or make your own adventure. And good luck!

Have you got any further advice about running Tenra? Comment away! And watch out for Four From Dragonscale, appearing on this blog soon!