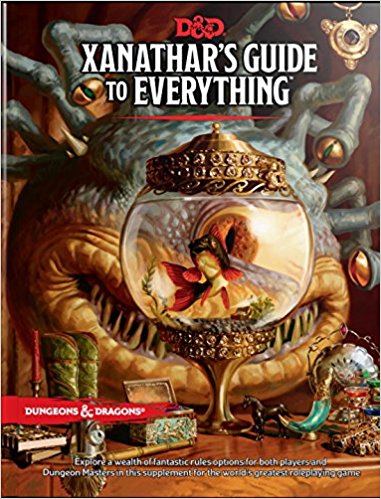 I’ve been saying for a while that playing, and running, more 5th edition D&D is definitely something I want to do this year; and in this post, I dissected the beauty of random tables and promised a review of the product that inspired them, Wizards’ latest D&D5e supplement Xanathar’s Guide to Everything. Well, here it is. Disclaimer first: I’m hardly the most knowledgeable person to talk about D&D5; if some of the new rules are imbalanced and hazy, I probably won’t have noticed them – other reviews are available, that will no doubt have a different focus to mine. I’m not going to be analysing the mechanical balance and options of each subclass presented, for instance – as usual in my reviews, I’ll be looking in broad brush strokes at what’s useful for one-shot games in the publication.

The Fluff – Roll 1d6 for your next three adventure hooks

While at first glance Xanathar’s contains little in the way of setting information, background or explicit ‘story,’ it is filled with is implicit, flexible background. Each character option and random table populates your game’s world with NPCs, factions, and hooks – and these are yours, not some silent D&D canon. This is a map-free book, but in using the optional rules just for your PCs you’ll find setting leaping out at you fully-formed.

What and how? Well, each background has additional tables, and there are a set randomly-rolled life events for each character. Each class has them; and they’re short and simple, easily picked though and just the relevant ones used. Wizards, for instance, now have three 1d6 tables that they can optionally use to determine what their spellbook looks like, what their mystical ambitions are, and what eccentricities they have developed through their studies of the art.

There’s also a set of random encounter tables by terrain and tier that give a good inclination of what different areas are like. It’s a long time since I’ve used any sort of random encounter table (and my procedure tended to be to roll up 2-3 in advance, make them tied to the world and interesting mechanically, and throw them at players if they came up, rather than rolling directly on them while in play) but they give a good sense for the setting and just what kinds of D&D creatures inhabit each kind of terrain.

Another nice bit of fluff is rules for Common Magic Items, which are cantrip-like magic items that provide small, but useful, functions – like the candle of the deep which never goes out, even underwater. Each one suggests multiple different uses – I can imagine a city beseiged by seasonal storms to have a roaring trade in candles for when the storms come, both from the wealthy seeking to keep their houses well-lit and those wanting to do business under cover of them.

The Crunch – there is a lot of this

Let’s start with the big stuff, the stuff that most readers will go to immediately – there are tons of character options, at between 2-4 new subclasses for each class. Some are familiar (I was pleased to see the Cavalier back, as well as the Kensai , Swashbuckler, and Hexblade) – and some are funkier suggestions (there’s a drunken master monk style, and a samurai). I’d really appreciate these when rolling up pregens for one-shots, as they provide a really clear distinct concept for players to latch onto. Because they’re subclasses, they don’t really add extra complexity to play, either, as they’re a one-off option that replaces other rules options in the class.

There’s lots of new spells, too – and extended trap design rules and systems for downtime. There’s tables and rules for buying, crafting, and selling magic items – not likely to see play in a one-shot, but fills in a handwavey part of play that’s been really poorly supported in previous editions. Back in youth of playing D&D, we’d always be heading back to town trying to fence yet another longsword +1 or potion of feather fall, and it always felt we were at the DM’s mercy as to how generous he was feeling.

There’s a new reading of the encounter design system, which appears much simpler and easier-to-use than the previous one in the DMG. My own experience from building encounters for one-shots right back from 3rd Edition would be to make every encounter harder than the rules say – you’re aiming for exciting, dangerous combat rather than the gradual resource-drain of regular dungeon exploration – and on the face of it this system makes it easier to twiddle those knobs to make that work.

Also there are extended rules for using tools – which I can see being really useful in a one-shot to make non-combat skill use a bit better supported in the game. Each set of tools is also linked to which skills are used with it – and if you’ve got any kind of mystery or investigation, these are good sources of inspiration for where clues might come from.

Truth be told, most of the use this will see in a one-shot is embedded in the options above, but there are 3 excellent pages in an appendix at the back that are really useful. They detail how to setup and run a shared campaign, and although they clearly are geared towards running Adventurer League games, there’s some useful estimates such as how long combat encounters should take and how you can pace experience so everyone stays on the same page. I’m a big fan of linking one-shots into episodic campaigns, and this gives you most of the tools to do so, as well as sharing GM duties.

In an ideal world, for me this would have been 30 pages, not 3, and maybe explored using D&D for one-shots, different campaign formats (the 3-session minicampaign, sandbox play with a player pool like in West Marches, etc) – ook at structuring games and giving players ownership and genuine choice while also managing your prep (stuff like The Alexadrian’s Node-Based Design) – but hey, if it had all that stuff in, there’d be less for people to blog about, I guess.

To sum up, Xanathar’s brings an awful lot of extra ‘stuff’ to the game, but in a format that makes it pretty easy to drop in bits of it at a time to add to, rather than complicate, your game. I’ve still got a lot more thinking and exploring to do about running D&D5e as a one-shot (and I’ll be posting my thoughts here), but Xanathar’s increases the range of tools available to do so. What approaches or prep have you found useful in setting up a D&D5 one-shot, and am I right in thinking that using supplements like Xanathar’s and Volo’s can add richness without complexity?