As befits a game with such a strong following, there’s no shortage of game advice for Call of Cthulhu. There’s a wealth of stuff in the Keeper’s Guide, and there’s some excellent advice in The Haunter of the Dark, a story-to-adventure how-to from Paul Baldowski for his own Cthulhu Hack system. Vaesen also has some excellent plot structure tips in its GM advice.

All of these are relevant to the plethora of Call of Cthulhu-style games (Cthulhu Hack, Trail of Cthulhu, Cthulhu Dark, Delta Green, etc, etc), and more generally supernatural horror investigation games (Vaesen, Fear Itself, etc, etc). As always these may not be to your taste – let’s have some agreeable banter in the comments if that’s the case.

As a minimum, stick an X card in it. Explain what it is, and what it does, and be prepared to act on it. More nuanced (and more complex) tools are available – use those if you’d rather. You have no idea what the triggers are for your players, especially at a convention, and even if you think you do, having one in place will reassure you and your players that you take their concerns seriously.

If you’ve tried it and not used it, that’s great – having it there means you have some confidence that your players were comfortable in the game. If you don’t care for comfort, and your plan is to shock your players for real, to get a reaction – well then you shouldn’t be running games at all, and certainly not at a convention. Get a grip. 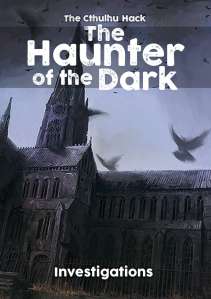 If the NPC they meet in the coffee shop is important, make her sound and look important; give her quirks and mannerisms, and have her drop clues pointing to sources of information. Offer skill checks and even more clear signs: she nervously grasps her handbag, glancing down to the corner of a book kept within. Justin Alexander explains it better than me when he talks about the Three Clue Rule – have multiple ways to move the investigation forward, and be prepared to have some of them come to the players as well if they don’t get them. Keep the pace.

As important as this, if an aspect of the scene isn’t important, don’t describe in it exacting detail so that the players think it is. Don’t plan any red herrings. The players will come up with these anyway – let them theorize, and gently head them off and back to the core. If they ignore the NPC above and begin looking into the rare coffee beans they serve, just circle them back round to the plot as soon as you can. Having antagonists that are active can help with this – if an investigation is stymied, have the clues come to them – maybe carried by men with guns.

Start with an Actual Scene

By an “actual scene,” I mean an in-game event with an element of risk and/or choice. Not a mission briefing, not a mysterious party invite, not waking up in the morning. Start at the party, at the scene of the crime, at the location of the Shoggoth attack, looking at the smear of blood that was once the victim.

There are variations, of course – in Delta Green, you’re likely to want a mission briefing at the start – but try starting with their first encounter of the mission and covering the briefing in flashback – it’s not as if they have an option to take it or not (especially in a one-shot). In Vaesen, often you’ll begin with a letter inviting you to investigate – but you get to pick your Advantages for that adventure – start in the carriage or on the train to the site of the investigation, and do this in flashback.

In any case you want your first scene to telegraph the PCs in the direction of your plot, making it impossible to ignore – and hopefully give them enough to do that they don’t start too much theorizing until they’ve found out more. 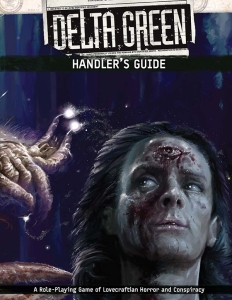 Investigation scenes should do one or two things – they should advance the plot, bringing the PCs closer to their ultimate adversary, or they should grant some advantage in that confrontation. “Advantage” is relative, of course – in Purist Cthulhu it might just be a good escape route.

By making investigation scenes reveal a weakness of the antagonist, a way in or out, or a key part of their backstory, you make these scenes valuable and keep the plot ticking along at pace. Scenes that look like investigation scenes, but reveal nothing and don’t move the plot forward, are just wasting everyone’s time. Flavour and atmosphere can be delivered during a useful scene, rather than being the focus of an entire scene.

Or rather, put it in the actual game. “What you didn’t find out was that…” is rubbish. Throw that information in, and resist the urge to gloat if the players haven’t solved your problems. Any reveal should take place in-game; not after it as a sort of “if you’d done better this would have happened.” Clever plots, NPCs and monsters are only clever if the players meet them.

So there you are – I’m indeed no expert on investigative or horror gaming, although I do know a thing or two about one-shots. You can also hear me and the Smart Party picking apart investigative games (specifically, the Vaesen introductory scenario) on their Youtube channel. What are your top tips for investigative gaming? Put them in the comments – or on twitter – and I’ll agree and/or argue with you about them!

I have a complicated relationship with Call of Cthulhu (CoC), Chaosium’s venerable, once disappeared, now resurrected d100 game of acute sanity-smashing horror. Like Traveller, terrible experiences in my early days as a player have made me resist it’s appeal. Unlike Traveller, I suspect that CoC is really quite good. It takes the right GM (or “Keeper,” in CoC parlance) to make it sing, certainly; but it’s an ever-present at UK conventions now – the tendency for PCs to die or go insane in the face of cosmic horror makes it an ideal one-shot game.

So, the Starter Set. It’s a slim boxed set, with three books, handouts, investigator sheets (some pre-generated – always useful, some blank), and a set of dice – with an extra tens d10 for bonus dice rolls. Like all Chaosium’s recent products, it has stunning art and layout, although the covers of the books leave me cold with their massive text and small pictures.

Alongside the pregens, there are four adventures in this starter set. The first, Alone Against The Flames, is a choose-your-own-adventure solo game, in which you generate your investigator (which is a nice touch!) and attempt to avoid being burned in said flames. I know from my own experience that these things are a bugger to edit and write, but it’s a great way to learn the basics of the rules and even character generation, and well worth the effort. It would be great if new games could have something like this – I can think of only this and the excellent Monkey 2nd incarnation that have this.

The next adventure is Paper Chase, a one-on-one (“Duet,” is I think what the cool kids call them these days) adventure; and Edge of Darkness and Dead Man Stomp, two ‘traditional’ group Cthulhu adventures. These are, I believe, all ‘classic’ CoC adventures that have been updated and revised, which is no bad thing. All do very well to showcase what 1920s CoC is all about – investigative, slow-burn but not boring, and satisfyingly dangerous.

What the adventures are also excellent for is explaining how to run them. There’s plenty of advice for the GM, sorry, Keeper, and reminders about rules which are really helpful. I wouldn’t mind more of this in all published adventures – I like a reminder of rules I’m likely to forget – and ideas for pacing and what to do if the players get off track. Dead Man Stomp also has a mature and helpful section on how to address racism in the 1920s – the adventure is set in Harlem – in a sensitive way.

The second book contains “introductory rules,” and is easily the slimmest of the three. It manages despite this to contain character generation, skill description, and sanity and combat mechanics, which is admirable. I’d go so far as to say you could just use this for long-term play – you could easily buy Doors to Darkness after this and continue your game.

What’s great is to see them condense what appears as a traditional “hardback book” game with plenty of rules into a slim pamphlet with just the important ones. I guess this does demand the question of what else is in those two big hardback books that makes your game better – and the answer of course is Chase rules; every game needs Chase rules, and Luck spends and more gorgeous art of course.

This is an excellent resource for the one-shot GM. Both of the two full-party adventures are ideal for single-session play, and contain a lot of explained structure that really helps you to think about prepping your own investigative one-shot (for more on this, see the series I did that starts here).

Indeed, this is an ideal entry drug to the joys of Cthulhu one-shots, to the point where I’m actually considering running Dead Man Stomp myself at one of my meetups – as much to get my Cthulhu chops in as anything.

All in all, a great product – and a fine addition to the new crop of Starter Sets. Even if you play Trail of Cthulhu or Cthulhu Hack, all the adventures in it are classics that it’s easy to drift or steal structure from – and it’s excellent value.