In Part 1, I talked about beating the nerves before a con game. I’m now going to tacle another part of prep – the bling that you can bring to the table. I have to admit first off that I’m not always the biggest fan of bling. Bling for bling’s sake is no good, and it’s absolutely no substitute for a well prepared game with engaging pregens and NPCs. I’ve been in a few games where there were plastic standees and pretty maps, but no core plot, and they didn’t fix the game.

D&D5e sheet. I think his Acrobatics bonus is wrong, now I look at it

You need character sheets. Most games, these are pregens. You’ve got a number of options – whatever the system provides, either written on with your neatest handwriting or form-filled in a .pdf, or ones of your own design. I’ve seen some nice pregen sheets where the GM has used photoshop to design a flavourful sheet that gets into genre. I don’t do this. I tend to use my own sheets, but it’s usually on Word, and I try to prioritise clarity at the table over looking pretty. I’m proud of my D&D5e character sheets – which I think I borrowed heavily from a twitter post from a Critical Role-er – and if you can get a clear, clean sheet, that wins for me. I sometimes laminate – if I’m going to use them more than once, I almost always do.

You need dice, pencils. Wipe-pens if your sheets are laminated. Don’t assume that all players will bring these things – in any given con game, at least two won’t bring anything. Specialist dice, you need enough for a big pile in the middle of the table – and be aware of dice requirements even for traditional dice. When I run 13th Age at 4th level+, I make sure I’ve got stacks of d8s, for instance – similarly for Marvel Heroic or other Cortex games, it’s d8s that often run short. For a d6 dice pool system, having a couple of blocks that are the same colour makes it easy to distinguish yours from the players’ when they have to borrow them.

(For Marvel Heroic, when I used to run it a lot, I had a 6-piece rubber muffin tin for my dice, each one filled with d4 – d6 – d8 – d10 – d12 – plot point tokens so that players could easily assemble their handful-of-dice for each task)

You need water (to drink, if that isn’t obvious), and I consider a stack of index cards (either card or wipeable) essential, too. For initiative, for writing down NPC names and sticking in the middle of the table, for Fate Aspects, for writing down player and PC names.

Different settings sometimes require bling – although I’m not a huge fan of character portraits as I prefer to leave it up to my players to set the appearance of their character. There are compelling arguments either way though!

My usual setting bling just runs to some picture sheets that give some ideas for what various things in the setting might look like. I adapted (stole) the idea from Gaz of the Smart Party, who in a Tales from the Loop game got some of the evocative Simon Stålenhag photos to add to the mood of the table. I use them in a more direct way – when I run Glorantha (usually 13G) I have a Friends sheet, that shows what Ducks and Trolls look like, along with some Orlanthi so the players have some idea what they might look like, and a Foes sheet with Walktapi, Broo, and Scorpion Men on.

You can get play mats printed of course, and the Big Book of Battle-Maps looks like an amazing investment if you use that sort of thing (even without grids, it’s often useful to be able to position PCs in the action). I try to have pictures of NPCs ready, but often I don’t – I do have name cards to put into the middle of the table, to avoid all the players having to write down someone’s name when they meet them (and often ask how to spell it).

Other useful setting bling, aside from character art and standees, include lists of names. Even when I’m fully prepped, I’ll often have to name NPCs on the fly, for when the players decide to interview a previously-unimportant bystander, and it’s nearly impossible to get names at short notice. I’m a fan of Fantasy Name Generators and the Story-Games Names Project to get my lists from, but there are many others out there. 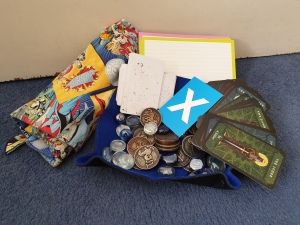 Some of my bling. I need a bigger ARU.

I’ve written about this before, in posts about running Fate and Conan one-shots, but here’s my general rule: if players (including yourself) have an economy they spend and need to track, they should have something to track it with.

I usually use simple glass beads, purchased as huge job lot from Dice Shop Online when I was running Tenra Bansho Zero and needed up to a hundred, but it’s nice if you can get something thematically appropriate. I have Campaign Coins for Fantasy games (Fate and Fortune points in WHFRP, Fortune in 7th Sea 2nd ed.) and little plastic skulls to track Doom in Conan 2d20. All Rolled Up sell lots of things you can use for this, including plastic counters you can draw your own symbols on that can be used for loads of things.

Cards are also incredibly useful, and it’s always worth a quick poke around the internet before running a game, as often people will have produced them already, even if there aren’t ‘official’ ones available. I wouldn’t dream of running Mouse Guard without the Action Deck, because it makes selecting your three-rounds-in-advance combat actions so straightforward, and there’s something awesome about giving a player a condition and handing them the card with them on.

One-sheet rules summaries are really useful, too. I like to make my own for behind the screen with rules I’m likely to forget (healing rules, usually, or the ‘what happens at 0hp’ question – things that are important but rarely come up). If the players have resources to spend, I’d strongly suggest that they need a sheet telling them what they can spend them on – this can just be a printout of that bit of the .pdf. If your game has critical hits or fumbles, having them printed out so the player can roll on them is better than them having you look them up in the book for them – if it’s feasible to have printouts of these.

All these things can, of course, be laminated, and that will make them re-usable for lots of games. All of which does add up to The Grognard Files’ claim that convention games are a conspiracy by stationers’ and printer manufacturers – we will get through a lot of ink to get these things ready. But they’re worth it, and you can pick and choose which you think is right.

Is there anything I’ve missed? Bling at the convention table has increased in my experience just in the last couple of years, while at the same time miniatures seem to be less common – what’s the best bling you’ve seen at the table?

I’ll be returning to talk about Convention Gaming in a few months – in the meantime, I have some reviews to get posted up. As always, if there’s anything you’d like to see on the blog, drop a comment here or get me on Twitter @milnermaths.